It looked like a fairytale,” Edon Muhaxheri ’17 said, recalling the moment his life took a 180-degree turn. “The indication that it was over was people falling from the sky. Paratroopers were arriving.”

It was June 1999 and Muhaxheri was 13 years old. He had just spent 78 days isolated with 29 people in two one-bedroom apartments during NATO’s intervention in the Kosovo War.

And he was an ethnic Albanian in Serbia — whose government, under president Slobodan Milošević, spent decades culturally oppressing its Albanian population in the disputed province of Kosovo. School was improvised, for example, because Albanians were forbidden an education. Classes were held in secret — sometimes at night in Serbian school buildings where bribes opened doors after dark.

This was life for Muhaxheri. This was normal. Until the day the sky rained soldiers.

“When you get used to something, you get comfortable with it. And then all of a sudden, everything changes.It was like starting a different life,” he explained.

Muhaxheri embraced that different life with a hustle and drive that still define him today. “A lot of funds were coming in, internationally, to get things back in order,” Muhaxheri said. “Children were working. I started my career when I was 14 as an illustrator and animator.”

He worked in advertising for several years and went on to earn an undergraduate degree in multimedia and graphic communications. He worked at Walt Disney World in Orlando through a college program. Back home, he founded an advertising agency that was eventually bought by Ogilvy & Mather, an event considered the peak of his career at the time.

When he came to MICA in 2015, he already had 15 years of professional experience under his belt.

During his first year here, Illustration Practice faculty member Kimberly Hall challenged new students to produce work that could be sold at MICA’s annual Art Market. She wanted to push students out of their comfort zone. Muhaxheri decided to make an automaton, a mechanical carousel toy that revolved.

“It was ridiculous and funny, because making pink and baby blue horses for a little toy was not my thing. But during the process, I fell in love with designing the mechanism of the automaton,” Muhaxheri recalled.

He became obsessed and discovered that complicated automata as seen in the movie “Hugo” — humanoid machines that write — were built in the 1800s by Swiss and French clockmakers. He noted, “Most of those automata have over 6,000 tiny pieces that work together.”

When it came time to pursue his thesis, faculty pushed him toward automata. “I had to come up with a narrative because I’m in illustration. I couldn’t just make a mechanical device,” he said. “I’m Albanian, so I thought my automaton could write something in my language.”

Because automata were a phenomenon in the 1800s, he looked at Albanian culture during that era and quickly found his inspiration. “The first primer, the first ABC book written in Albanian, was written in 1844 by Naum Bredhi. Somehow, I would link my automaton to that book.”

As he researched, Muhaxheri discovered something truly fantastic: the alphabet used in that first ABC book was the only such alphabet created specifically for the Albanian language.

Muhaxheri explained, “When I write my name in the Latin alphabet [used by most Western countries], I have to add a lot of different letters for you to pronounce it phonetically. This Albanian alphabet corresponds to the sounds that Albanians make.”

He found a number of sources that mentioned the alphabet, but he couldn’t find images. One of his last resorts was to contact the Museum of

Education in Albania. “I wasn’t optimistic, to tell you the truth. But I called and they said, ‘Yes, we have a copy of the primer. Do you want us to scan it for you?’ I was blown away.”

The Albanian primer was written in both Greek and the Albanian alphabet, called Vithkuqi. Muhaxheri connected Greek letters with their Albanian counterparts, eventually decoding the lost alphabet. 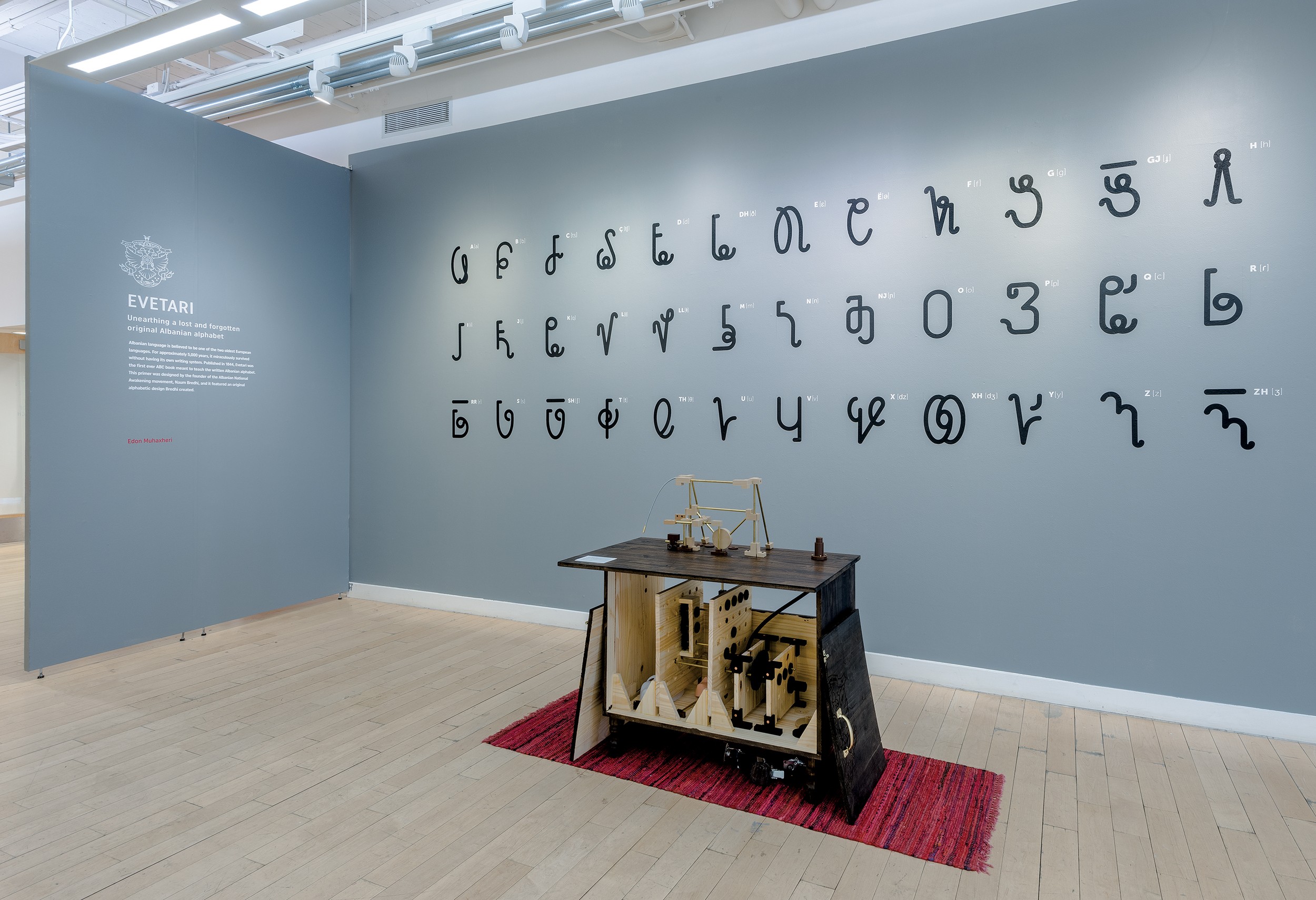 Over time, Muhaxheri has taken the advice of international alphabet experts, revising the alphabet so that some letters have changed.

His thesis changed. Instead of focusing solely on an automaton, Muhaxheri also digitized the alphabet into Albanian Helvetica so that Albanians around the world can use it. And when Kosovo’s ambassador to the U.S. visited MICA to hear Muhaxheri’s thesis presentation, her subsequent tweet reached 100,000 people. The discovery of Albania’s lost alphabet has made Muhaxheri a celebrity among native Albanians. Shows displaying the automaton and alphabet are planned for Kosovo and Albania, as well as a permanent display at the Museum of Education that sent him a copy of the primer. Muhaxheri reflected, “Going to another country to study was nothing. I went through a war. But I brought my culture with me. This project has to do with bringing Kosovo here with me. I constantly try to promote my culture. I think it means helping my people,” he said.

“Already, people back home are using the alphabet. They’re making tattoos with the letters. They send me pictures of their children trying to learn these letters. This is amazing.”