Across Baltimore, more and more people are getting the things they need to make their lives better. Those living in the city’s food deserts have better access to fresh, nutritional food. HIV-positive men are helping others move beyond stigmatization in order to stay healthy. Children in underprivileged communities have safer areas to play.

This is all happening because of the work coming out of MICA’s Center for Social Design — work that began back in 2007, when the center’s founder and co-director, Mike Weikert ’05 (Graphic Design MFA), had an idea.

At the time, Weikert was newly appointed as co-chair of MICA’s undergraduate graphic design program, and he began thinking about the process of design and the process of educating young designers. He knew design was evolving, that real-world practices were becoming more interdisciplinary. At the same time, he was keenly interested in a growing awareness within the design community of social design — a creative process and practice dedicated to understanding social problems and supporting positive social change.

Despite these notable movements in the field, design students were still often taught in a traditional approach, one that kept them siloed from other disciplines and from the growing social design movement. Weikert wanted to change that.

So he turned his idea — that graduate and undergraduate students could work together with partners and communities outside the institution on socially focused projects — into Practice-Based Studios. Launched in 2008, these semester-long courses join MICA students across disciplines with an array of outside partners to collaborate on projects that use design to positively impact society.

The Studios’ successful collaboration with Real Food Farm is a prime example of their work. The urban farm, which is located in Baltimore’s Clifton Park neighborhood, wanted to increase awareness and use of their products among city residents, many of whom live in ‘food deserts’ with poor access to fresh produce. So they teamed with students in a Practice-Based studio to explore solutions.

After a month spent working at the farm, those students came up with the Real Food Farm food truck, which hosts mobile food markets and delivers produce to homes for a modest cost. They also designed a bright green iconic logo, which the farm uses as a moving billboard on the side of their truck — community members flock to it when it stops in their neighborhood.

To date, the Studios have raised more than one million dollars in outside funding, engaged more than 250 students and faculty across 12 disciplines within MICA, and worked on more than 50 projects with partners that include the Baltimore City Health Department, Whole Foods Market, the Johns Hopkins University Bloomberg School of Public Health, Johns Hopkins Medicine, University of Maryland School of Medicine, National Wildlife Federation, the Maryland Energy Administration, and many more. The projects have been highly successful — so successful that they marked the beginning of a larger focus on social design at MICA.

Today, the Studios are just one of a core set of interdisciplinary opportunities and educational offerings based in MICA’s Center for Social Design. Along with the Practice-Based Studios, the Center houses the MA in Social Design (MASD) program, post-graduate fellowships, and long-term Impact Initiatives.

The first offshoot of the Studios’ success was MASD. Lee Davis, who co-directs the center and MASD with Weikert, explained, “After the Studios started, [Weikert] realized that there were more and more students who wanted to take more than one class. There really was a hunger for a deeper immersive experience.”

That hunger led to the creation of the MASD program in 2011. Currently in its fifth year, MASD was the first graduate program in the country based on a social design model, and it emphasizes a practice-based approach to using the process of design to develop tangible outcomes. 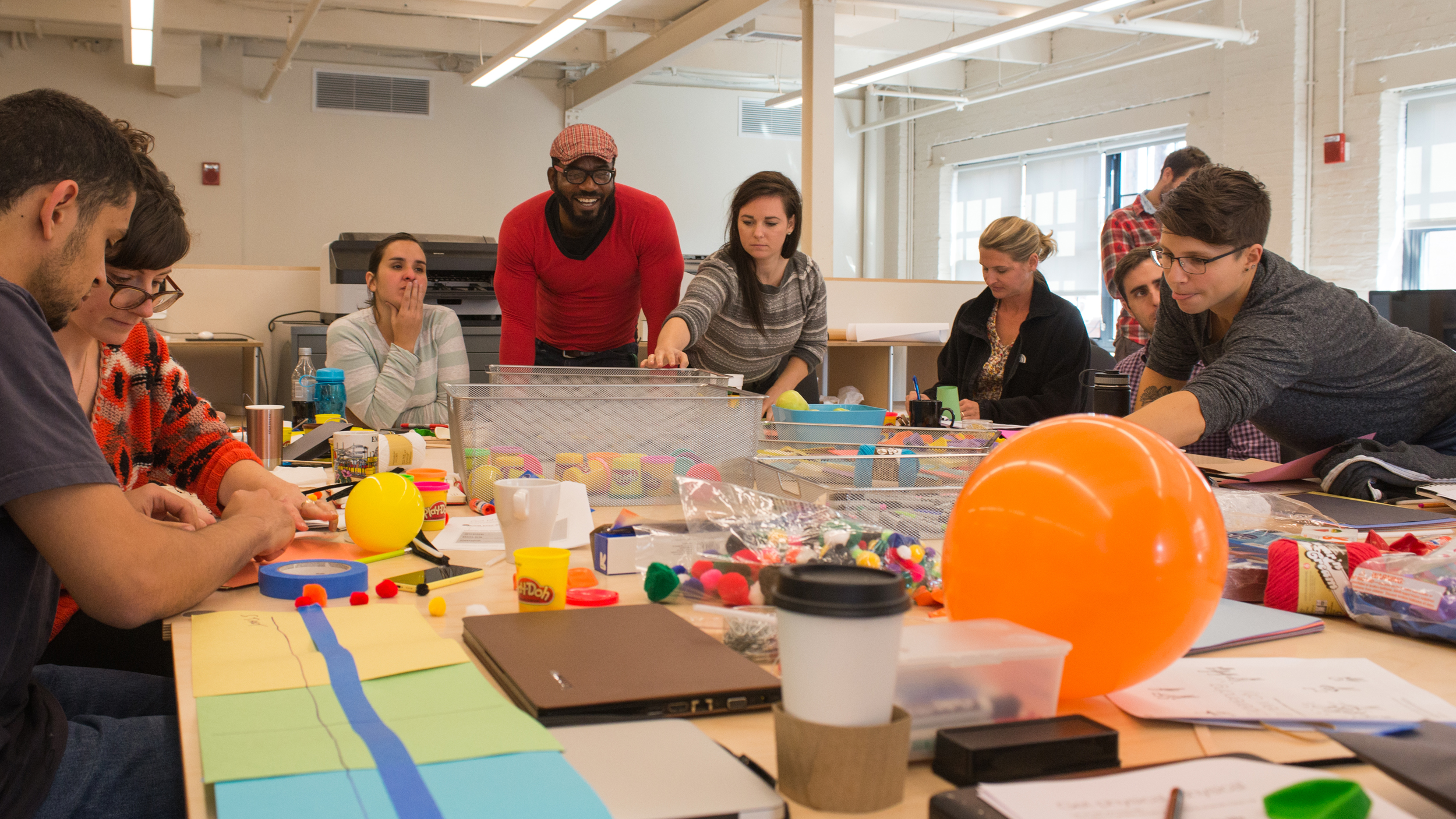 “Students in MASD incubate a thesis project, and many of them continue to further develop that idea after they graduate,” Davis said. “Kenny Bademosi ’15, for example, is someone whose thesis was the start of a great project that began at MICA and has blossomed.” Bademosi’s project, Serophobia, delved into the stigmatization of HIV-positive black men, a phenomenon that can lead to the avoidance of medical care and more HIV infections. Working with the University of Maryland’s Department of Medicine, Bademosi reached out to Baltimore’s black MSM (Men who have Sex with Men) community to open up communication about HIV/AIDS and its stigma, and used that insight and information to design a more open online dating experience for black MSM. The program has been so successful that Johns Hopkins University and the city’s health department have continued funding the effort.

Being able to give MASD students the funding to continue their work post-graduation was the reason Weikert developed the post-graduate fellowships that fall under the umbrella of the Center for Social Design. Established with the support of the Robert W. Deutsch Foundation in 2012, the Social Design Fellowship includes a stipend, institutional resources, and studio space, which allows two MASD graduates a year to deepen the thesis they developed during their time at MICA.

The fellowship also keeps innovative ideas and talent in Baltimore, including Briony Hynson ’12, a former Social Design Fellow who was able to continue her work creating public spaces that promote play within the city’s underserved areas.

Currently deputy director of the nonprofit Neighborhood Design Center (NDC) in Baltimore, Hynson noted, “One of the benefits of the approach of the Social Design program is thinking about how design is about the process and not fully focused on the delivered materials. If we can use design as a structural problem-solving framework, it can build on input from stakeholders that will help create better outcomes. NDC has been around since 1968, during the design movement of the time that’s similar to what we’re seeing now — there’s an interest in seeing what we can do for society rather than just a focus on designing a pair of sneakers or a car or a building. There’s more to the process that can create larger positive impact.”

With the 2014 launch of the Center for Social Design in the Lazarus Center for Graduate Studies, the Practice-Based Studios, MASD, and Social Design Fellows were brought together under one roof for the first time. That in turn has allowed Davis and Weikert to take the ideas generated through these programs one step further.

“The physicality of this space has breathed a whole new life into this vision,” Davis said. “We started to look at these [social] issues not only in a curricular and educational context, but asked ourselves what kind of role the Center could play in developing a real and lasting social impact.” Their answer is the Impact Initiatives, multiyear projects with outside partners to address the big issues of our day. While the initiatives bring faculty, students, and fellows to the table, the work isn’t tied to the academic calendar. Instead, the projects are long-term, with an initial priority to focus on education and youth, climate change, and health.

Since Weikert had that first idea back in 2007, other colleges and universities have launched social design programs of their own. MICA’s approach remains distinctive. Not only has the Center for Social Design garnered multiple awards, it has helped advance social design around the world. It was invited to the Clinton Global Initiative University, was the first design program to receive the Ashoka U-Cordes Innovation Award in 2014, and has also acted as host to universities from the Netherlands, Hungary, and Latin America.

As Davis noted, “Although we’re committed to and immersed here in Baltimore, we’re also connecting more nationally and internationally.” The true value of an idea becomes evident over time. Good ideas transform a promising thought into a solid concept that grows and endures. The best ideas resonate deeply, and their purpose is not lost in the implementation.

If you look at the evolution of social design at MICA and its growing impact on Baltimore — and beyond-you can say that Weikert had a really good idea.